What reminds everyone when I says Bengali is mouth watering and luscious dessert 'Rasgulla' and 'Mishti doi' to name the most popular ones in the list and of course Bengali cotton sarees. The medium of communication here is Bengali. The traditional attire of Bengali women is simple forms of these Tant sarees takes around two days to weave and more intricate designs could even take five to six days to complete a saree. Generally Tant saree comes in pastel shades with beautiful thick borders.

The history Tant, particularly the Jamdani and muslin became famous during Mughal era, but the British wanted to destroy the cream of art, to safeguard the textile industry they followed the direction which was given by Royal hands. The partition of Bengal province of British India and departure of British from India many skilled weavers, masterweavers they had to settle themself in beautiful places Nadia, Burdwan, Hoogly of West Bengal the incentive, aid provided by the Government, this is how the new seed was grown and become famous.

Classification done on region, varities or types in Tant sarees

Traditional inspired motifs
The animal motifs used are hathi known as elephant, aansh known as fish scale, ghora known as horse moyur known as peacock and other traditional motifs which are inspired are phool known as flower, tara the star, rajmahal the royal palace, nilambari known as blue sky, chandmala known as garland of moons, the halfmoon known as ardha-chandra, kolka known as paisley motifs, Pakhi the birds, nortoki known as dancer, rath the chariot and dhaki the drummer are few known motifs.

Comfortable to drape
Being a breathable fabric, It is considered to be the most comfortable wear during Indian hot and humid summers, one will feel very graceful draping these sarees. Best Known for its airy texture, lightness, papery or crisp and transparency. Eco friendly Taant sarees or Tant sarees, which is privileged by Bengal textile industry. The red big border with white saree is one of the traditional attire, it is said to represent the colors of the Goddess Durga and there by, it is worn mostly during the Durga pooja festival.

Fabric care for Tant sarees
Do check out for specific care instructions on the garment tag once you purchase and follow the instructions carefully, it addition to it, here are certain guidelines 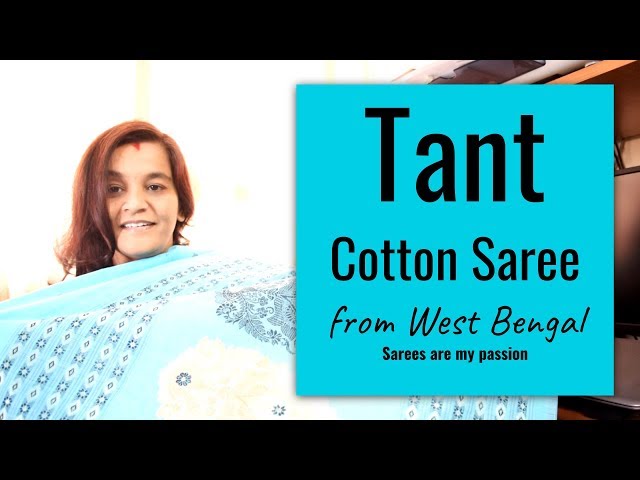